I have noticed that I have become a bit more inclined towards celebrating festivals after coming to London, maybe it is out of being homesick during festive times and also to ensure that I remember the traditions involved I guess. ‘Makar Sankrant’ is a Hindu festival celebrated by my community ”Maharashtrians” with great pomp and enthusiasm as it heralds the season of Harvest. Similar to this festival is Lohri which is celebrated by the Punjabis in the North of India, Pongal in the state of Tamil Nadu, Uttaryan in the state of Gujrat. One festival so many names and so varied ways of celebrating! It is not only in India that this festival is celebrated it’s also welcomed in Nepal, Sri Lanka, Cambodia and Laos amongst others!

My mother always used to make a smoked aubergine vegetable dish called Vangyache Bharit – written in Marathi as – वांग्याचे भरीत on Makar Sankrant so I decided to make it too for Sankrant this year which was on the 14th of Jan’14. We also exchange small ladoos made of sesame seeds and jaggery called ”Tilache Ladoo” and wish each other by saying तिळगुळ घ्या गोड गोड बोला -‘Tilgul ghya god bola. It means that we shall forget and forgive any past bitter exchange of words and start afresh with this sweet offering and only speak sweet words of love. Til stands for sesame and Gul stands for jaggery in Marathi, so TilGul means a sweet made using sesame and jaggery as the main ingredients

The recipe is modified in various regions of the state of Maharashtra and also the variety of vanga/eggplant/aubergine or brinjal as we know it in urban India, is different in various parts of the state and in various states of India, of course differing due to climate and soil. Aai ( meaning Mother in the Marathi language – my mother tongue) always looked for the light green vanga or eggplant with white stripes on its skin which she rightly said tastes way better than its darker purple-skinned cousin.

Aai’s recipe which I will share now is how we have always made this dish at home. There are several variations and styles depending on which part of Maharashtra you hail from and also various sub-cultures and availability of local ingredients and palates.I guess what makes this recipe so special is that it brings back happy memories of childhood, festivity, celebration and the unmistakable smoky and rich vanga (eggplant/aubergine) taste with the crunchy red onion and a slap of hot spicy green chilli mixed in between, all balanced so well with the various masalas that go into this bharit Ummm!

Serves:2 -as a main with chapatya(Marathi for Indian Naan Bread also called chapatis in Hindi) 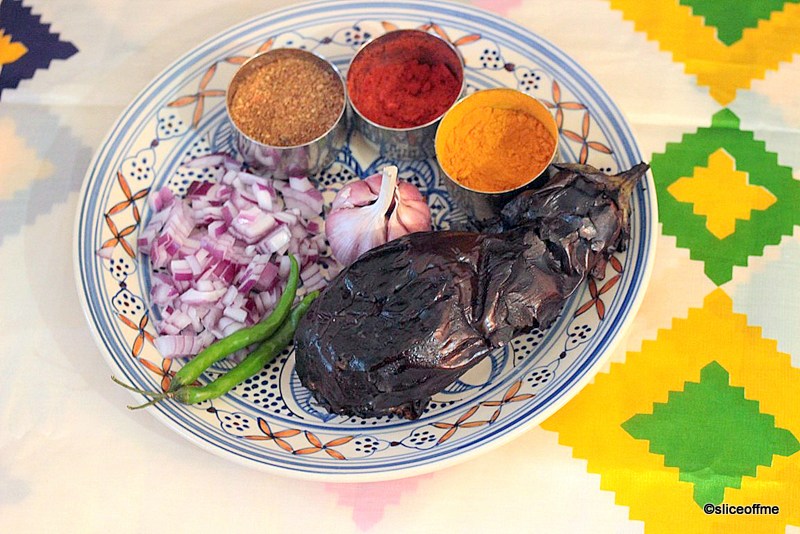