It was on a sunny summer Sunday morning that I finally went to the local car boot sale to look for any treasures that I may find to use as food props and found this beauty.

But it wasn’t just this beauty that we came home with. We found a beautiful marrow and I instantly knew what we would be having for dinner. sometimes things just come to you by some sort of divine alignment of separate incidents to become one. I had some Lactofree mature cheddar cheese which I was looking to experiment with and this was the perfect chance to use it in a bake. Had a packet of smoked bacon cubes and yes had some cute, tiny bottles of olive oil which had been sent to me. I normally would infuse my own oils and always have a big bottle  of olive oil into which I stuff a few cloves of crushed garlic, some chill flakes and fresh herbs – the oil adds beautiful depths of flavour in whatever I use it for and because it is a lovely bottle, it looks pretty on my kitchen counter too – which reminds me I need to get around to doing this again soon – hummm

Also, I had these bright and colourful mini chilli plants now sitting on my window sill, looking all pretty and waiting to be used – yellow and deep aubergine coloured chillies – this was going to be one colourful bake!

So this beautiful marrow came home with us and just like that became part of our dinner plans…..

The Terra Rossa oils, I received a pack of 3  exquisite Jordanian infused extra virgin olive oils – chilli and lemon infused oils and an unfiltered, cold dripped Sinolea extra virgin olive oil. Not only is it good to have in the store cupboard, I think it makes for a lovely gift idea too! Yes, it isn’t too early to start planning your Xmas gift list is it?

It is incredible how much flavour this humble marrow packs in. I cannot wait to use it again in soups and stews. Yes, it’s autumn and we are going towards colder weather. So along with getting those woollies out we also need to get started with beautiful soups and stews hummm – the seasons they are a-changing! This easy recipe is perfect for busy weekend evenings ( or for a lazy Sunday evening when you want to spend some time watching telly sipping a glass of wine and chilling out rather than slaving in the kitchen!) when you do not want to compromise on flavour and want a wholesome meal too. For a meat-free option replace the bacon with a spicy potato and cauliflower mix. Whatever you choose to add as the stuffing, the result will always be satisfactory – that’s the nature of this beautiful marrow ….

*With thanks to Terra Rossa for the samples. No monetary compensation was offered for a positive review. As always all opinions expressed here are entirely my own. 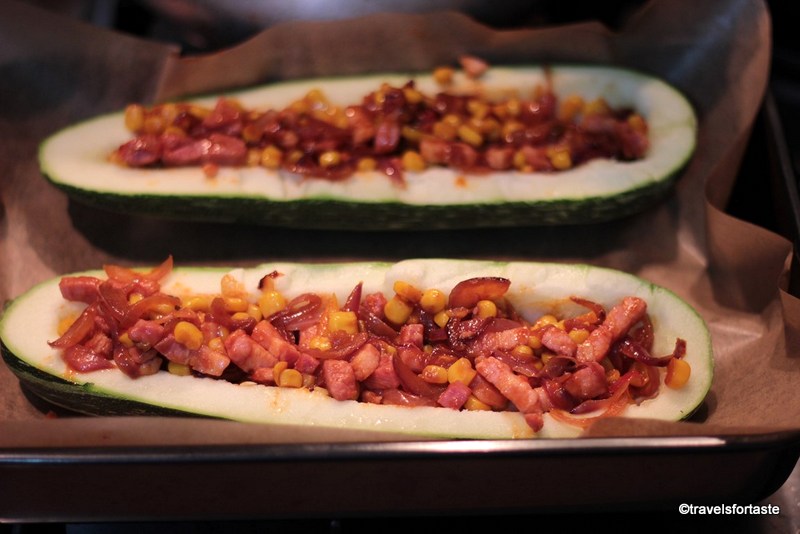