Spice rub for everything from Vegetables to meat and seafood

Elevate the taste profile of your grilled or roast vegetables ( or seafood or meat) with this delicious homemade spice rub.

Now I have tried this spice mix on broccoli, kale, and roast potatoes and it always works wonders. But we have loved it most with fish. Grilled, BBQ’ed, fried, steamed, or baked – we love eating fish in our house and I have created my own recipe for an Indian spice rub. I used this on haddock fillets on the BBQ this Sunday and the result was very satisfying. Even with frozen fish fillets straight out of the freezer onto the hot grill, the spice mix hit all the right notes.

It was incredibly easy to create this spice rub at home using my Optimum G.21 Platinum blender, the panel has six pre-programmed functions which are a real no brainer and one of those functions is ‘Grind’. I try and use my Froothie blender as much as possible and not just for my morning smoothies, it has just made my life that much simpler!

These quantities yield enough spice mix for 2 medium-sized fillets with a little leftover. If you want to use it for 4 or 6 fillets simply double the quantities.

Why not try my recipes for Tandoori spiced grilled Lobster tails and Haddock fillets with this spice rub?

Last week Sunday was mostly grey and rainy , but I wasn’t feeling blue about the weather, I spent the day mostly curled up with a good book watching Netflix with the hubster around. We also decided that since it was the day the lights went on at Regent’s street it was the perfect day to get out the ladder and reach for the large brown carton which contains amongst other odds and ends our plastic Christmas tree neatly folded and wrapped, all our precious baubles and ….the neatly wrapped bundle of lights…..

As the crowds gathered around to watch the lights go on at Regents Street around 3pm, as hubster was gently snoring away after a rather delicious (if I may say so myself) meal of fried king fish, red lentil curry and rice, I decided that it was perfect time to take stock of what was in my store cupboard and check on my dried fruits which are now steeping in a rather rich alcohol base – ready for the day I will make the Christmas pudding. It was then that I found a beautiful tin with 2 packets of gorgeous spices to make Mulled wine, which was part of my goody bag given during July at the Christmas Show by waitrose.

There is something absolutely magical and heartwarming about opening a packet of spices , it is like flipping through an old album, happy memories of holidays spent with family , turkey carved, gifts unwrapped on Christmas morning….. all seem to come tumbling out of my blue tin spice jar which has a picture of Santa pulling his sleigh along the snow. The light brown tightly curled cinnamon sticks and hard dried orange sitting amongst deep red dried berries and fragrant cardamom… like a bouquet of aromas…

Waitrose Cellar had sent me a case of carefully picked red wines to let me experiment and come up with a recipe for mulled wine, from a country of my choice and taking inspiration from their Mulled wine page .They have a beautiful collection of recipes for mulled wines from around the world.  They also sent as part of the case a bottle of wine that was mulled by their team of wine experts. 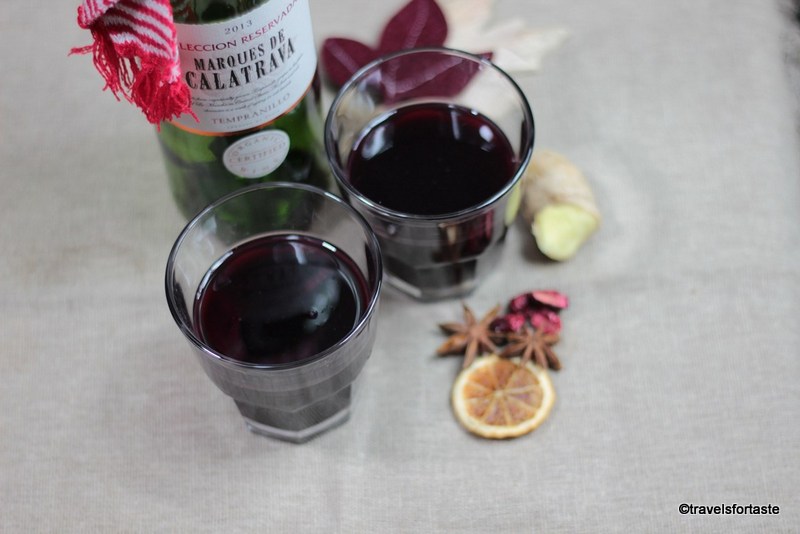 I remembered reading a recipe for Vin Chaud  or Hot French Mulled Wine on  David Lebovitz’s blog long ago and I knew I wanted to pick this French version of mulled wine and create it using the red wine – Marqués de Calatrava Organic Selecci´on Reservada Tempranillo from my wine case sent by Waitrose. Priced at £8.99 it is described as having notes of juicy strawberry with subtle spices and vanilla. This  fruity red made from Tempranillo grapes grown in the La Mancha region. It is a medium to full-bodied wine with a rich palate. It sounded apt for making Vin Chaud as it would marry well with the ginger and pepper required in the recipe used by David Lebovitz, which was inspired by a recipe Food52 cookbook. He has very rightly mentioned that adding cinnamon into the Vin Chaud which is actually made with white wine, overpowers the taste of the other warming spices in the hot French mulled wine.

I also found another recipe for Vin Chaud by Rebecca Franklin a French food expert on about.com and it recommends the addition of cinnamon and cognac –  now Cognac –  I am a huge fan of. Friends who know me well, tire of my boring old way of almost always ordering a large peg of cognac with hot water when we go out during winter season. It’s just something to do with the rich, strong ,smooth and warm drink sipped slowly that warms my blood ,like a mini warm toasty log-fire inside my body, an internal thermostat of sorts…  🙂

So I decided to use combine both the recipes and both hubster and me are really satisfied with the end result. So much so that we ended up greedily pouring ourselves a more than generous portion of the Vin Chaud to perilous after effects which involved both us falling fast asleep while the tv played a few episodes of Breaking Bad to no one in particular – humm

Note to self – do not guzzle wine on an empty stomach especially Vin Chaud made with a large ‘splash’ of Cognac added in….

This warm festive mulled wine infused with hot spices and spiked with Cognac, honey and pepper is a great choice for serving at Christmas Parties and for sipping on co during cold, winter evenings – imagine drinking this fab French mulled wine in the dead of winter when you have just stepped in after braving the wretched winter winds , as the heating and warm socks work their effect on the outside, the hot wine induces a sense of warmth and festivity within – no one will judge you if you do go a bit overboard… 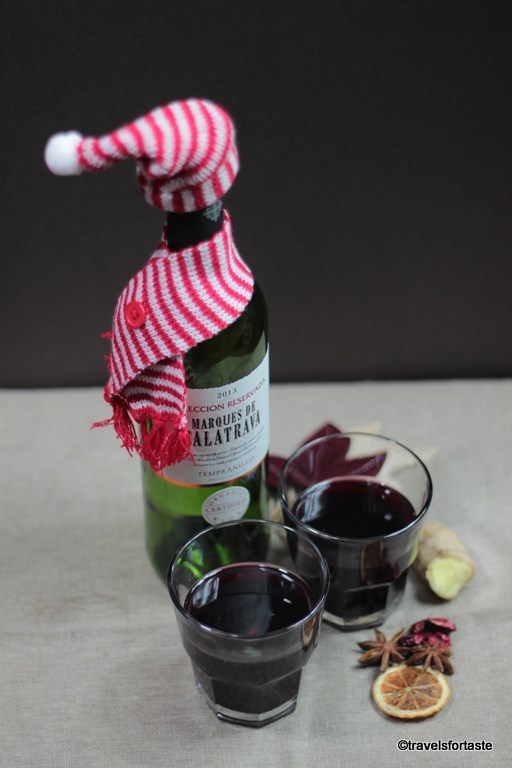 I do hope this festive Hot French mulled wine warms the cockles of your heart this winter. Cheers!

*With thanks to Waitrose Cellar . No monetary compensation was offered for a positive review. As always all opinions expressed here are entirely my own. Thanks to David Lebovitz for his inspiring post on Vin Chaud.